Backpacking with my new friend.

A little while ago, I talked about being diagnosed with Type 1 in early February of 2012. I touched on some of the challenges I faced at the time of my diagnosis. Well not only was I trying to learn all about Type 1, but I was 5 weeks away from a 30 day back packing trip to South East Asia. This definitely threw a wrench in my trip and my trip threw a wrench in my diabetes!

Since I was about 21, I had always wanted to see parts of Asia but for some reason it never panned out. This past year, I had the opportunity to go with a friend who was also looking at going. We settled on Thailand (Bangkok and Chaing Mai), Singapore, Cambodia (Siem Reap and Phnom Penh) and Vietnam (Ho Chi Minh City). My departure date was March 11th and I had a ton to prepare for in terms of my diabetes.

First, I had to break the news to my Endo and DNE. They were both totally confident that I would be able to go but knew that it left little time to ensure that I had all my ducks in a row. Diabetes was SO new to me at the time and there were so many things that needed to be considered. I had only been on insulin for a couple weeks so my Endo was still waiting to see if I would "Honeymoon". So far I was responding really well to my new regime but diabetes is so unpredictable so back up plans needed to be put in place in case this happened while I was away. I was provided with me Endo's email, pager and home number to use in case I was running in to trouble with my diabetes while I was away. My Endo also felt that I should use a different long acting insuling to help with the changes in my routine. I changed my long acting insulin from the Novo Nordisk NPH to the Lantus. The Lantus is said to be a much more stable basal insulin and I also work shift work as a part of my career so it would also be more stable while working my night shifts.

My next issue was how I was going to keep my insulin at room temperature while I was in countries that were experiencing temperatures of 34-45 degrees celcius. We pre-booked almost all of our accomodations so I was able to verify that they all had fridges in our rooms. They did, so that would take care of the extra supplies that I would be bringing. But the issue still remained that during the day when we were out sight-seeing, I would need to try and regulate the temperature of my insulin. I received many different suggestions but I was able to locate the most amazing product EVER! There is a company in the UK that makes insulin wallets called Frio's. They can be purchased in a large variety of sizes and contain an inner gel pouch that is placed in water and will then keep your insulin at safe temperatures for up to 45 hours. All they needed was a sink and some water! They are totally reasonably priced and can be reused. I bought one small (for my insulin pen) and a larger one (for my extra insulin when I wasn't near a fridge). These little guys were litterally a life saver and I will use them again and again!

Other than getting a letter from my Endo allowing me to bring sharp stuff on an airplane, I was pretty much ready to go as far as my diabetes went. So, on March 11 I took off overseas for just under a month. My trip went very smoothly health wise. It could definitely be a challenge at times managing my diabetes. There were so many things on this trip that effected it. The heat and activity in the heat definitely made my body require less insulin so it took a bit to get that adjusted at first. I have to admit, that I definitely did not test as much as I should have been. It was a very busy trip and there was lots to see and do so I was not eager to be held back by my new friend. We were up early almost every morning and kept active throughout the day.

I saw and did everything that I set out to do on this trip. It truly was a trip almost a decade in the making and I'm so glad I did it. When I got home though, I started to have a tough time accepting that diabetes was going to be a part of my life every single day. Forever. Although I had the most amazing experience, every day on my trip was a constant reminder that life was forever going to be different. I was angry about my diagnosis and felt like it took away from my experience. I felt like I was constantly pre-occupied with managing my blood sugars and I had anxiety about having lows while I was so far from home. It took me a good 2 weeks to settle back in and work on accepting and embracing what life had thrown my way. Yes, diabetes has forever changed me and my life. But it doesn't have to hold me back. Now that I've been home for almost 2 months, I now realise that I can do ANYTHING with diabetes. There's always a way to make it work. I mean, I went half way around the world with it only one month in! Take that D!

Here are a couple pictures from my trip...


If any of you are planning any trips, feel free to contact me for advice, diabetes related or not! :)

Alison
I'm a newly diagnosed Type 1 Diabetic in February 2012. I plan on writting about my journey as I navigate through the maze that is Diabetes. 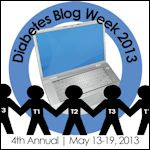